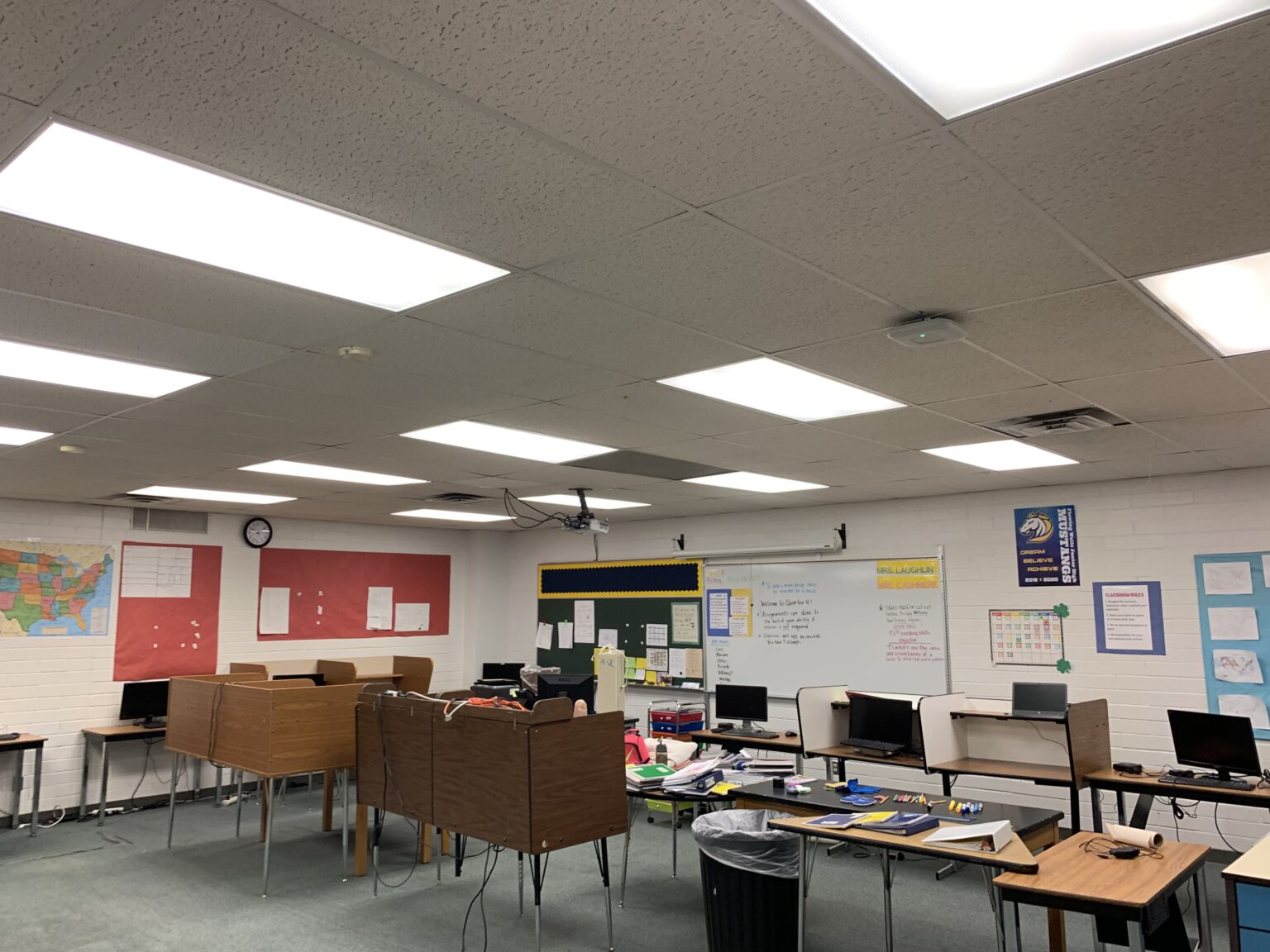 At Flowing Wells, we completed a total lighting package that included interior and exterior lighting retrofits for all classrooms, hallways, gymnasiums, parking lots, and more. Based on the school’s operating hours and the total kilowatts reduced from the project, we estimate that Flowing Wells Junior High will save more than $36,000 per year in energy costs.

Flowing Wells is a Tucson-based junior high school that educates more than 800 students per year. As many of us would agree, education is among the most crucial elements of American society, so it is important that we make sure students are in the most optimal learning environment possible. That’s where we come in.

Not only is the educational atmosphere a priority when working on schools, but the safety of Arizona’s youth is a primary concern, as well. We were able to help achieve both objectives, as we upgraded their interior and exterior lighting systems to create a level of brightness and clarity that will help these kids for years to come.

In terms of the specifics for the project, we decided to replace the interior fluorescent tubes with LED T8 tubes to create a higher lumen output, while ensuring an optimum ambience for the surrounding areas. Furthermore, we replaced the exterior incandescent light bulbs with LED A19 bulbs to create a wider display of light outdoors.

As mentioned above, Flowing Wells was in need of a complete lighting retrofit that included both interior and exterior lighting replacements. After our energy assessment expert walked through the school and provided a detailed estimate with various lighting options, we chose to go with a combination of 9-watt LED A19 bulbs, 12.5-watt LED T8 tubes and 10-watt LED T8 2-foot tubes to complete the project.

The primary challenge within a learning environment is that we need to make sure that the light is bright enough to help the students focus but not too bright, as to overwhelm them. At the same time, we want to reduce their overall energy usage to save the school money in the process. Ultimately, we were able to do both with the products we chose.

All of the exterior light fixtures were using outdated incandescent light bulbs to cover a large outdoor area. If you aren’t familiar with incandescent bulbs, they are actually the original bulb that was invented by Thomas Edison, and despite various advancements over the years, I’m sure you can imagine the kind of dingy light they were giving off. We decided to replace them all with an upgraded LED version of the A19 bulb, reducing the wattage per bulb from an astounding 60 watts to a mere nine watts.

Inside, they were using 32-watt fluorescent tubes, which is certainly an upgrade from incandescent technology, but we knew that we could improve both the quality and efficiency of their lighting systems by retrofitting them to LED. We decided to replace them with 12.5-watt LED tubes, which reduced the energy output significantly. In addition, LED lighting technology leads to increased lifespan of the products, requiring little to no maintenance.

Ultimately, when all was said and done, we were able to reduce their kilowatts tremendously, while enhancing the school’s overall aesthetics. All things considered, we estimate savings of approximately $36,341 per year from the upgrades.